Ofcom’s decision to find that China’s UK broadcasting channel CGTN breached the impartiality rules on five occasions, and impose a sanction, could not be more timely. It is published (Bulletin 403) when some Western sentiment has turned against Peking in the wake of the Covid-19 pandemic and China is cracking down on Hong Kong again by imposing the new and controversial national security law. As SMAB consultant and former Ofcom senior standards manager, Trevor Barnes, explains the significance of this Ofcom determination though has been under-reported because of the media focus on Coronavirus.

Fortified by the recent High Court decision in favour of Ofcom in the legal challenge brought by the Russian channel, RT, against seven impartiality breaches (see previous blog ‘First court decision on Ofcom and impartiality’), the regulator applied its court-approved approach to impartiality to CGTN’s coverage of the sometimes violent pro-democracy protests in Hong Kong last autumn. Ofcom had originally been alerted by a complaint about the broadcast of an alleged ‘forced’ confession by a Chinese dissident on China Today and so started some monitoring of the channel’s other output. The result was five broadcasts breaching three different Broadcasting Code Rules: 5.1 (news must be presented with due impartiality), and 5.11 and 5.12 (due impartiality in coverage of a ‘major matter of controversy’). 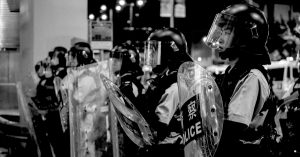 In the five programmes Ofcom decided the Chinese channel did not give sufficient coverage to the ‘alternative viewpoint’ of the Hong Kong pro-democracy protesters. CGTN argued that this was difficult because people associated with the protesters did not wish to give interviews. And it is here that the most important lesson for the Chinese TV channel and other international broadcasters lies – underlined here by Ofcom, as it was in the RT and various other previous impartiality breach decisions.

If a broadcaster like CGTN is covering a major controversial political matter it MUST give some coverage to the alternative viewpoint and give it due weight, even if people representing that the viewpoint are not available to be interviewed. This can be done in various ways – including the broadcaster summarising that viewpoint very briefly (but fairly) in commentary. But it MUST be done – and ideally in the same programme.

In my view the problem is most likely to arise when a major issue emerges which pits a Western view of a controversy against that of a powerful country which has TV channels licensed in Britain broadcasting its view of the world – like CGTN with the Hong Kong protests, or RT over who was responsible for the Skripal novichok poisoning back in March 2018. It can also happen with TV channels broadcasting in the UK from the viewpoints of particular nations – like India and Pakistan – between which there are notorious differences of opinion.

International broadcasters can avoid these issues by giving their staff pragmatic and effective compliance training to equip them with the tools to spot impartiality problems like these in advance and solve them. Sadly CGTN did not appear to do this before these five programmes were broadcast and must now face the reputational and financial consequences. I predict Ofcom will not remove CGTN’s licence to broadcast but impose a substantial fine of at least £100,000 to be consistent with the RT sanction (a £200,000 penalty) and send a message to all broadcasters.

International broadcasters like CGTN can freely in my opinion broadcast from a particular viewpoint and on the most divisive and controversial subjects and still comply with the Ofcom Code. RT, for example, clearly seem to have learnt the lessons of their expensive clash with Ofcom and as far as I can make out not had any investigations started, or breaches recorded, against them for any programmes since mid-2018.

All international broadcasters should take note of this important Ofcom decision and learn its lessons.