SMB continue to succeed in this year’s legal directories, having increased our number of Band 1 lawyers to three in this year’s Chambers UK Guide. This follows on from our achievements in the Legal 500 2020, announced last week.

The firm has ranked in seven department categories, with 16 members of our team from nine specialisms selected as ranked/noted professionals. Ranks are awarded by researchers in each category, who assess against criteria by looking at matters from the past year and talking to clients about the service they receive from us. 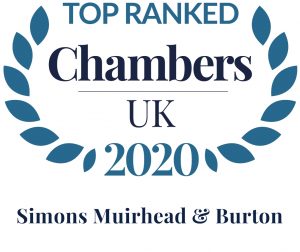 “We are amongst the very best at what we do, evidenced not just by this year’s rankings in both Chambers and Legal 500, but by the fact that we have now consistently achieved high rankings year after year.”

The categories in which we rank are: Crime; Family/Matrimonial; Civil Liberties & Human Rights; Defamation/Reputation Management; Media and Entertainment (Film and TV, Music and Publishing); and Retail.

Full results can be read here.